The northeastern part of Michoacán is famous for its Don Vasco Route.  Vasco instituted the idea that each town should have its cultural specialty, something still going strong today.  So one town specializes in furniture, another in ceramics, one in colorful textiles, & yet another in Catrina dolls (the skeleton dolls common during Day of the Dead celebrations).  Read more here about the Don Vasco Route.

We stopped by the town of Paracho on our way from Uruapan back to Chapala.  Paracho specializes in hand-made string instruments, mostly guitars.

We were welcomed into town by a giant guitar, but we didn’t immediately find the guitar district.  First we wandered around the huge street market going on.  The locals look very indigenous, both in features & dress.  Almost every woman is wearing a rebozo wrap for carrying babies, goods to sell, or just as a scarf.  We were the only outsiders we saw all day, and wow do we get the stares!  They’re kind stares, though, sometimes fascinated by my height, but mostly by iola.  If I had a dollar for every time we were told she looks like a doll!  People will literally stop what they’re doing, tell their friends what they just saw, and the whole group will try to catch a glimpse of iola.  They love feeling her hair and skin, which iola isn’t always a fan of!  A group stopped and asked to take her picture, and we obliged.  She’s like a celebrity here, it’s so funny. 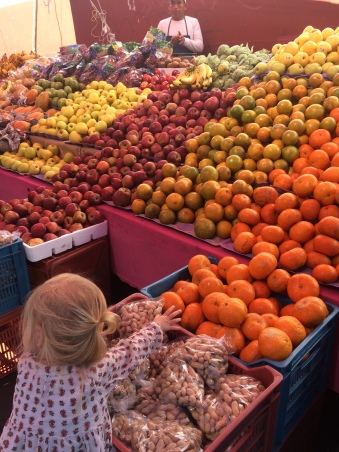 Locals kept pointing me toward the guitar zone but we weren’t finding it.  I asked one older gentleman, and without saying a word, he waved us to follow him.  He led us to blue house, rang the bell, and motioned us to go inside with the lady that opened the door (who turned out to be his sister).  She welcomed us in, we still not knowing why we were there exactly.  She called her husband in.  We started chatting in their living room and he brought in guitars he had made.  To be honest I was quite skeptical at first, thinking maybe the locals ride the fame of Paracho being a guitar making town but really just import them from China.  Part of my doubt came from him pulling the guitars out of plastic bags to show them to me.  But then he proved me entirely wrong by taking me to his workshop!  He makes all sorts of cool instruments, all by hand.  He meticulously cuts out pieces of stained wood to create decorative inlays.  They’re like works of art.  I ask if he makes ukuleles, and sure enough, he goes and gets one that he made.  At this point we’ve talked nothing about prices.  I was assuming for sure a hand-made guitar or ukulele must cost hundreds of dollars.  I was wrong again.  He asked 500 pesos for the ukulele, about $30 US.  I couldn’t believe it!  I happily paid his price with no bargaining involved and now own a beautiful ukulele.  His guitars were about double, $60 US, or $180 for very intricate ones with seashell inlays.  If our car weren’t already jam-packed I would have bought every instrument he had.  In the background you can see his patterns for different kinds of guitars.  Check out the baby guitar he’s making behind iola on the workbench. 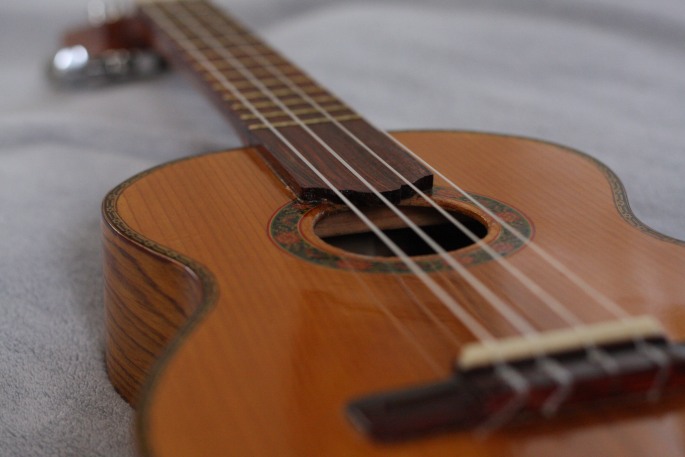 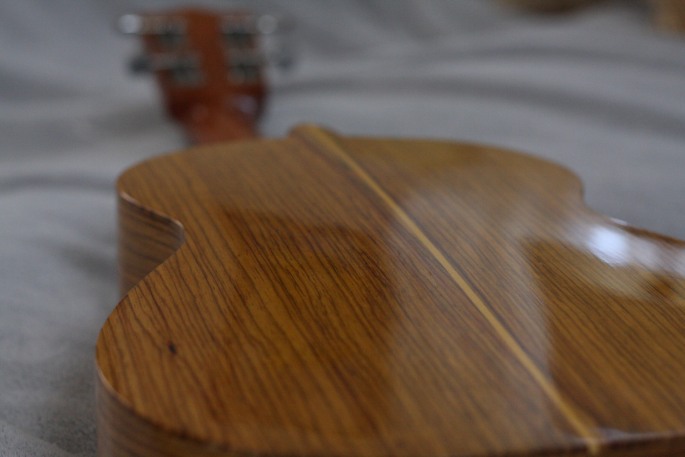 We said goodbye to the luthier (my newest vocabulary word), his wife, and her 102 year old mother sitting in their small courtyard.  We then found the main strip of guitar makers, with all sorts of gorgeous instruments.  My favorite was the “bajo sexto” a six string (double strung, so actually 12) bass guitar. 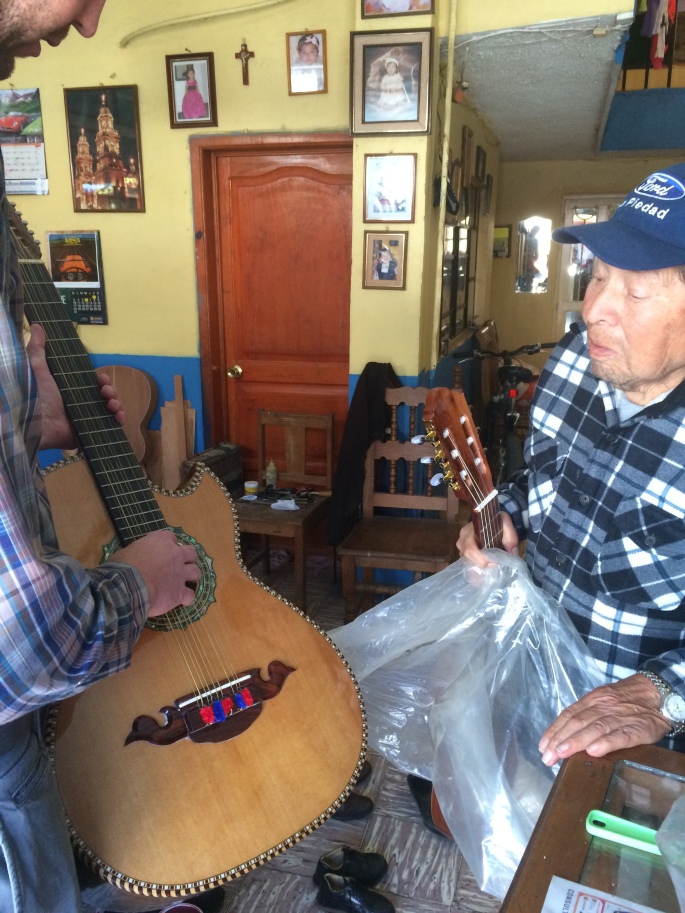 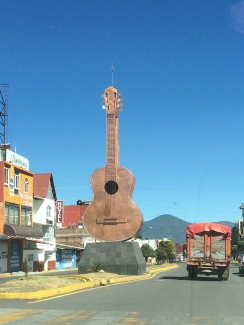 UPDATE!  Remember when on Unsolved Mysteries they’d show the mystery but then surprise you with an UPDATE at the end?

I got home that night excited to play my new ukulele.  It was strung for left-handed players, so I took all the strings out to restring it.  In attempting to tune it I snapped one of my strings.  The next morning Carrie starts researching for me where I can buy new strings in the area and stumbles across a ukulele group in Ajijic, not far from where we’re staying.  I emailed the group, and members were fast to respond and very helpful.  Turns out they were meeting that very day, so I showed up to see what I could learn!  A nice guy Tim gave me a replacement string, I bought their song book to follow along, and had an awesome time. [Side note: being a small world as it is, Tim knows Castagna, the new owner of our 1968 RV Norma].  It’s such a fun instrument.  I didn’t go pro in a day but I was able to follow along a bit and learned a lot in just a couple hours.  It’s turning out to be probably the most fun $30 I’ve ever spent.

One thought on “Strum a Ukulele”