It’s official!  Frida is a Mexican citizen!  Normally we wouldn’t wander out so soon after the birth, however we needed to get Frida’s Mexican birth certificate in order to then apply for her US passport from the American consulate in Guadalajara.  Otherwise Frida would be stuck in Mexico when we leave in April.

We went with Maria the midwife to the local “civil registry” to get the birth certificate.  People, including Mexicans, love to dramatize how difficult government functions are here.  I have to disagree.  In January we helped someone pay property taxes and renew a car registration, done at two different offices, and now today we applied for the birth certificate.  All those experiences have been fairly straightforward without too much waiting, but maybe we’ve just been lucky.  I will say it went much smoother by having Maria along to help today.

[If you found this post by searching what documents you need to get a birth certificate in Mexico, I’m going to list them clear at the end of this post.]

For the birth certificate we needed two witnesses to sign.  Maria was one but we needed another, so Maria and I went out witness hunting.  We found a nice lady working as a house cleaner sweeping the sidewalk (something many Mexicans do daily).  The owner of the house, her boss, wasn’t home, so she volunteered to come along!  She ended up having to wait a long time so at the end I gave her 200 pesos, a little over $10.  That’s possibly more than she makes in a whole day of work, so everybody left happy.  She was a mother of seven, a grandmother of 12, and was smiling & happy to help.  Her signature will forever be on Frida’s birth certificate!

There was a lot of paper shuffling going on.  Our naming system confuses them.  When people marry here the wife doesn’t typically take on the husband’s last name like in the US.  In Spanish-speaking countries the norm is that children get two last names; the first last name is the father’s paternal surname, and the second last name is the mother’s paternal surname.  But since Carrie took my last name, that means Frida’s name according to the Mexican birth certificate software should be Frida Ayn Ferguson Ferguson.  Their computers won’t print the certificate unless both last names are filled in.  We’ve heard some offices are unwilling to waiver from this, so the baby ends up with a double last name.  That, in turn, leads to more paperwork to change the name back to US norms when applying for the US passport at the consulate.  Luckily we had a helpful group of workers today who made a phone call and figured out they could substitute dashes where the second last name would normally go and bypass the requirement.

Here’s the stranger witness, named Bertha, finally getting to sign after 30 minutes of being very patient. 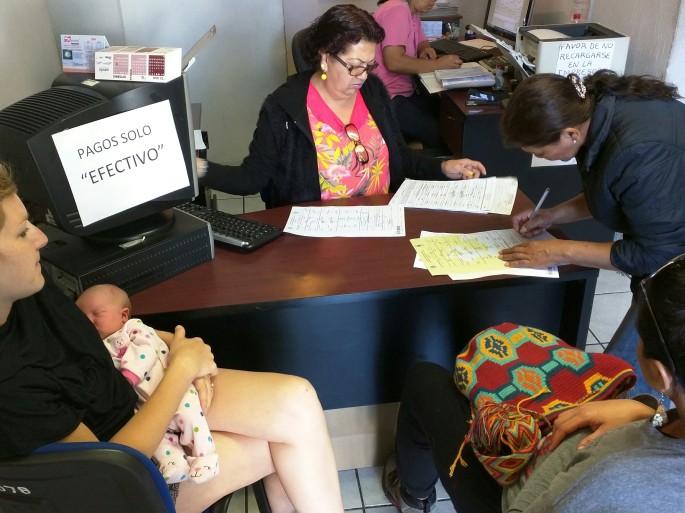 The Mexican birth certificate looks very official.  They even put Frida’s thumbprint on it, possibly the most adorable thumbprint ever to have existed.  Note the stranger witness Bertha’s big smile!  At this point she didn’t know I was planning to pay her something.  She was just there to help and took time out of her day to do so.  How nice.  Furthermore, Maria helped another mother birth all night and hadn’t slept at all, but she’s smiling all the same.  How fortunate we are to have met such nice people here.

Below are bonus pictures.  We took a bunch of pictures the other day but I haven’t had time to put them up.  Many turned out to be Pinterest Fails (search Google Images for “Anne Geddes Pinterest Fails”, here’s an example: https://www.pinterest.com/pin/56787645273132718/).  BUT, some of them are pretty darn cute.

This isn’t staged.  iola loves kissing Frida and does so about 20 times a day.

Here’s information for people looking for guidance on what they’ll need to bring to the Registro Civil to get a birth certificate for their child born in Mexico.

-Original and one copy of identification for each parent.  We used our US passports and provided black & white copies.  You get the originals back, of course.

-The application for the birth certificate, which our midwife provided and helped us to fill out.  Also bring a copy of the application (we didn’t and they made us go make a copy to keep for our records).

-Originals and copies of ID’s for each of your two witnesses.

2 thoughts on “Officialize a Mexican Daughter”