We spent a quick night in Laredo, Texas, then headed out early this morning for the border.  Of all the days in the year we could have done this, I think we nailed it choosing Day of the Dead to cross into Mexico.

I don’t often think about all the time I’ve put into learning and practicing the Spanish language, but it’s times like this border crossing that I’m quickly reminded how handy it is to not be lost by Spanish-only signage.  It was confusing enough even knowing what the signs said!  The border process on the Mexican side took about two hours, which consisted mostly of waiting in lines.  First our passports were approved, then we waited in another line to obtain a permit to temporarily import our car into Mexico, with a limit of 180 days.  If we don’t return within that time-frame we will lose a $200 deposit and won’t be able to take a car over the border again.  Evidently they were having issues with people taking cars over the border to sell in Mexico without paying an import tax.

Leave your gats in Texas, gents.

iola’s first order of Mexican business? Do her business.  Please note the yellow ball fringe hanging inside our windshield.  We got into the Mexican spirit a few weeks ago. 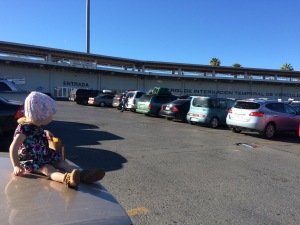 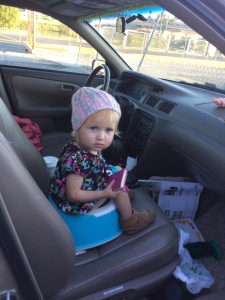 Flowers for sale everywhere for Day of the Dead cemetery decorations.

Mexico so far is rough around the edges, but beautiful at its core. 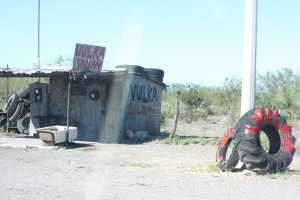 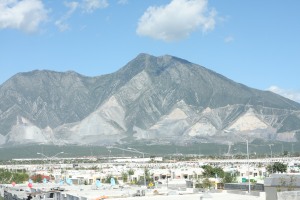 For those of you that don’t speak Spanish, this sign means, “Lift with your knees and wear a sombrero.”

Trash cans are located along the highways every few miles.  Great idea if you ask me.